Texas had an open primary on 1 March 2016.    How the Texas Delegates were allocated.

(Note:  There are multiple voter guides popping up throughout Mo. County. Whereas the MCTP does full vetting of the candidates (that amount to questionnaires and research, as well as many video interviews), most so-called "voter guides" are created to push a slate of special interest candidates. 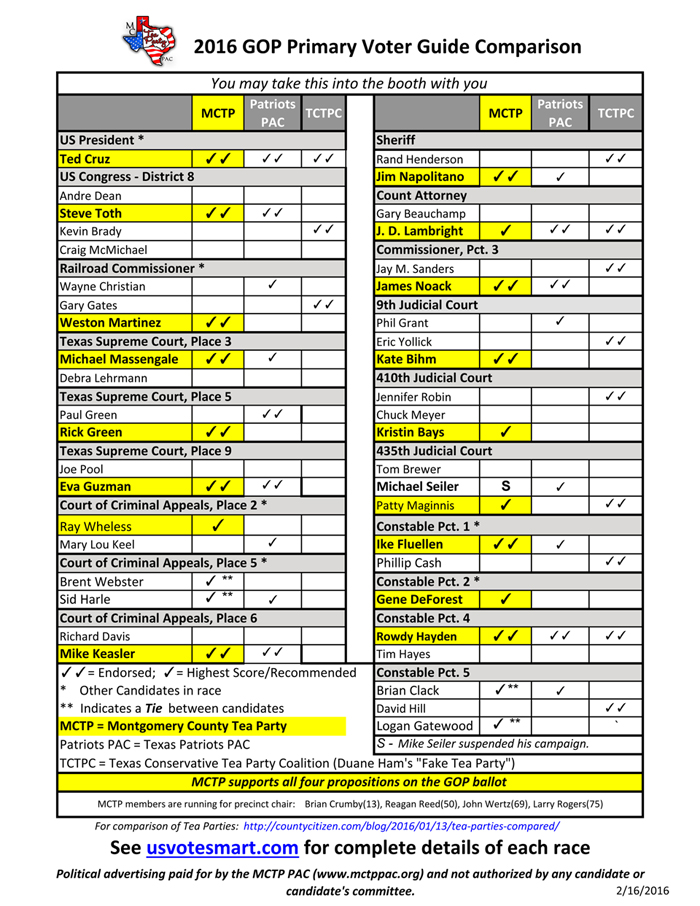 Comparisons were made between the 3 most well known groups in MoCo {the constitutional conservative MCTP, the secular moderate Patriots PAC and Texas Conservative Tea Party Coalition - Duane Ham's "Fake Tea Party"(per Breitbart), that was started as a group w/the Tea Party name apparently to deceive voters (MoCo Police Reporter)}. This occured back in 2014 elections and continues. Best to know the difference.

** UPDATE **  Duane Ham responds to our assertions on his credibility with an editorial in the Courier.  Rebuttal to Ham.

MoCo "Circle of Influence" - who's funding who???

The concept of the Iron Triangle, oftentimes unholy alliances between "Politicians", the special interest groups of "Mover & Shakers" and the "Wallets" that support them and keep them in office, would appear to be alive and well in Mo. County and at the federal level.  It's well known that the "wallets($$$$)", who fund campaigns at the federal and state level, consists primarily of lobbyists(see CD-8 candidate Kevin Brady).  On the other hand, most of the "wallets" at the local level are Developers, Engineers and Contractors, whom feed at the government trough and may benefit from their candidate/s in office.  This appears to be born out in the attached consolidated campaign finance reports of certain politicians and their "support" groups such as the TCTPC (i.e. Fake Tea Party).  {This is a WIP (work in process) and will be updated as new data becomes available(MCTP 2/9/16)}.